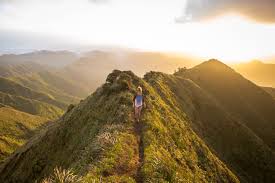 The Haiku Stairs, otherwise known as the Stairway to Heaven, charts a path to a beautiful peak on the island of O’ahu. Once a popular attraction for Honolulu, the stairs fell into a state of disrepair.

They have remained closed for nearly 30 years.

However, that hasn’t stopped an estimated 4,000 hikers from trespassing to enjoy the vista provided by the Haiku Stairs. With lush greenery filling the slope, and a view of Kaneohe Bay at its peak, the trail proves attractive to many determined hikers.

Unfortunately, the Haiku Stairs face demolition. The Honolulu Board of Water Supply formally recommended its removal in an environmental impact statement released about a month ago.

While the board owns and manages the land the stairs occupy, they suggest shifting ownership to another agency to potentially reopen. Presently, the board spends roughly a quarter of a million dollars annually on security to keep hikers away.

As a way to secure the future of the attraction, the city of Honolulu actively seeks an organization to operate and manage the Haiku Stairs. They propose charging a fee to access them will pay for the cost maintaining them.

The proposal counters statements made by Honolulu Mayor Kirk Caldwell last year. Then, he expressed interest in transferring ownership to the Department of Parks and Recreation. Instead, no such measures have taken place – hence, the board’s recommendation for removal.

“Public access to the stairs for hiking and guided educational experiences can help to preserve the history attached to it and to tell the stories of this special place for future generations,” said Caldwell.

Local residents relayed their frustrations with hikers trespassing on their land to gain access to the Haiku Stairs. Any organization’s bid to take over would require a proposed unobtrusive entry point.

Furthermore, the city requests any organization’s submission to include a financial plan, as well as a restoration schedule.

Perhaps Honolulu will find in a private organization what it lacks in its own departments. The future and accessibility of the Haiku Stairs hangs in the balance.