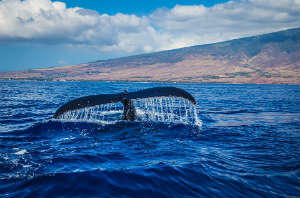 On Thursday, several federal responders along with numerous private boats attempted to free a young humpback whale that was caught and tangled with heavy gauge fishing gear. A dive boat off Maui the first to spot the subadult whale on Wednesday.

First, to respond, the U.S. Coast Guard arrived at the scene and attached a tracking device to the entangled whale ensuring its eventual freedom from the debris. The National Oceanic Atmospheric Administration (NOAA) coordinated the effort. This whale was dragging 500 feet of gear and the line rooted deep in the whale’s mouth. Unfortunately, the entangled whale was small and had whale lice, indicating a long journey carrying the gear.

Eventually, the group cut the line. This left only a small amount of line within the whale, but pulling the line out further would create an injury.  The cut gear will be analyzed to determine its origins. This also allows for a reduction of whale entanglement in the future.

What does this mean for the environment?

Annually, there are about ten whale entanglement responses. Although in 2018 there was fourteen! As of this year, there has already been nine! This sparks some debate. What’s causing the numbers to increase so rapidly? And why is it that when the sightings decrease, the entanglements increase?

Humpback sightings are declining in Hawaii! But, what’s the cause? Since a team of U.S. International researchers, wildlife managers, federal officials came together in Honolulu of November 2018, they tried to find out. The research pointed to a disruption in the food chain. The group stated that it is most likely due to the warmer ocean temperatures in the whale’s common Alaska feeding grounds. Most likely, it is caused by climate change. This is why individuals work so hard to free these whale entanglements.

The NOAA is taking this chance to remind individuals that they should never attempt to free an entangled whale themselves. Individuals should keep a safe distance and alert officials.

So, do you think that global warming contributes to this crisis? Is the fragile ecosystem at risk?