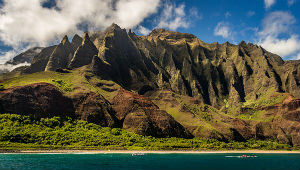 HONULULU, HI – A-List Hollywood actor Dwayne “The Rock” Johnson showed up to encourage protesters who were preventing construction of a giant telescope on Wednesday. His visit coincided with an agreement by the Hawaii governor’s envoy to Native Hawaiian leaders to begin conversations about how to end this dispute.

On this day dancers performed hula and chants as “The Rock” appeared at the protest site on Mauna Kea. Social media sites captured images of him giving honi, nose to nose greetings, with protesters.

Johnson demonstrated his gratitude at being amongst the protestors. He said, “I stand with you. This is such a critical moment and a pivotal time. Because the world is watching.”

Johnson’s words drew cheers and loud applause. The Rock, who’s Samoan and not Hawaiian, spent part of his youth in Honolulu. Plus, he’s scheduled to appear as King Kamehameha the Great, the leader who brought together the Hawaiian Islands in 1810, in an upcoming film.

Currently, the protest is standing in the way of a road in order to block construction crews from getting to Mauna Kea’s summit in order to construct the Thirty Meter Telescope. This is the 10th day of the protest.

According to Hawaii County Mayor Harry Kim, who is acting as the governor’s envoy to the protestors, he’s planning the first of many potential get-togethers with Native Hawaiian leaders. Kim’s aim is to bring people together to work as a group for a common cause. He fears the community will splinter otherwise.